This project aimed at improving the transport infrastructure in the cross-border region Turnu Măgurele – Levski, implicitly at the level of the two existing tertiary nodes, as well as the development of a common traffic management system.

The project aimed at modernizing 1,909 km from Turnu Măgurele Municipality and 7,068 km into Levski Municipality, as follows:

The total length of the modernized roads is 8,977 km.

The locations where the traffic equipment has been installed are as follows: 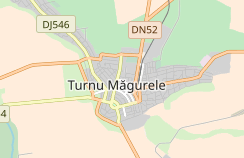